Or: Why buildings with voids in the middle are bad design choices.

Apple’s plan for a new campus in Cupertino has received a lot of attention in the media and architecture world, most of it awestruck and full of praise, reproducing the same glittering images of a new iconic building. The project is not only seen as a major contribution to a sustainable and green workplace, but also has the objectives of “promoting shared creativity and collaboration” and “creating a distinctive and inspiring 21st Century workplace”, as quoted by Dezeen.

Steve Jobs himself, in a presentation to the Cupertino City Council Meeting, called it a “pretty amazing building, like a spaceship landed”, “pretty cool” and “human scale” due to its low rise character of four storeys only.

But how human scale is a building with a diameter of 500 metres, larger than the pentagon (that houses more than twice the numbers of staff)? How human scale is it, when the way to the provided staff restaurant could be as far as 800 metres, if your desk is at the wrong end?

Certainly, uniting all staff under one roof is probably going to ease collaboration and may allow a sense of community to flourish. Maybe staff will even appreciate occupying an iconic building.

Still, buildings with big voids in the middle are wasting a great opportunity, i.e. the opportunity of creating a centre within the building, a hub for staff to get together. What people at Apple are soon going to realise once the project is built, everyone has moved in and developed their everyday routines, is that distance will rule in the building.

So why would distance matter that much? Research by Tom Allen from MIT in the 1960’s and 70’s has shown that the likelihood of frequent communication drops significantly when colleagues are seated more than 20 metres apart. This relationship between decreasing interaction with increasing distance has been confirmed in more recent studies (see my PhD on the Space-Organisation-Relationship). This is still valid in a time of electronically mediated communication, because we tend to email the same people frequently that we interact with intensively face-to-face.

Apart from the sheer scale of the building, two main design decisions create higher levels of distance than necessary. Firstly, the circular shape with a void in the centre, and secondly the design of a double circulation route on the outsides of the ring.

A long stretched design maximises distances between people, while a more compact built form allows for proximity and integration (as for instance, argued by Ermal Shpuza in his Phd). What is more, a void in the middle is the worst design choice to be made, since it means there is nothing, where there should be the heart of the building. Again, this creates depth instead of closeness, as Bill Hillier has shown in his book ‘Space is the Machine‘ (see page 235ff for the discussion of inaccessible blocks or voids in the centre of a configuration). 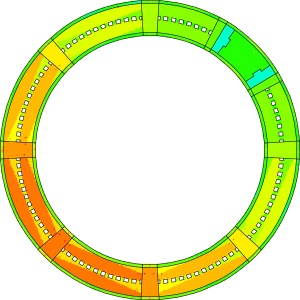 A quick visibility analysis of Apple’s new building using Space Syntax methodology confirms that this is going to be a building without a strong centre. As in a heat diagram, the analysis shows areas of integration in red and areas of segregation in blue. It is obvious from the image that there is no strong attractor and no centre in the building. The staff restaurant in the top right corner is the least integrated space, because the serving areas cut it off from the adjacent spaces. What is more, doubling up the main circulation into an inner ring and outer ring again creates depth and pulls people apart instead of bringing people together.

In summary, I doubt that this building will foster shared creativity and collaboration. Of course this can only be seen once the building is in use. Still, function and the likely impact of configuration on the emergence of social life seems to have been sacrificed for the wish to create an icon. Hopefully, it will at least look good from space.