Several months after the opening of the new concourse of Kings Cross Station, now that the initial hype is over, I’ve finally had the chance to go and have a closer look at how the new station works.

Designed by John McAslan and Partners and engineered by Arup, the new station was mostly praised for its spectacular roof structure. Quite rightly so! The roof indeed is amazing. It would not have come to my mind to call it a “reverse waterfall: a white steel grid [that] swoops up from the ground and cascades towards 16 unifying perimeter columns“, but then I’m not an architectural critic and my lack of poetry skills might stand in the way of coming up with such descriptions. But of course it is eye-catching, elegant and beautiful. 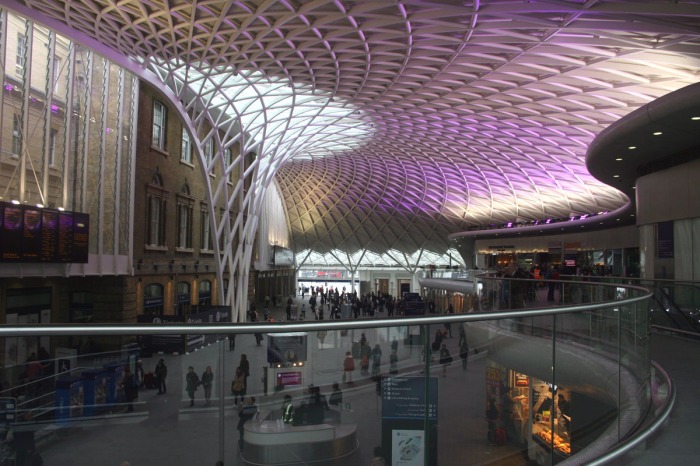 Still, I was most curious how the new station works. Anyone, who has ever had to catch a train from the old Kings Cross station, or even worse, meet someone there, will remember how awful, user-unfriendly and densely packed the station was – to the degree of it being almost impossible to manoeuvre through the waiting crowds. So the question was: how has the new concourse changed usage patterns? How has it solved the misery of the old Kings Cross station? And how can Kings Cross catch up with its elegant, brand-new refurbished, luxury shopping neighbour St Pancras, its long-standing rival of old days?

I couldn’t have chosen a better day for my visit: several trains were delayed or cancelled due to overhead wire problems somewhere central in the rail network. The building was therefore put to a serious test and the old Kings Cross station would have been a miserable place to be under these circumstances. Indeed, the station was relatively busy, but I was in for a pleasant surprise – the atmosphere was calm, the station was lively, but nowhere near to overcrowding and there were still seats available for tired travellers. So what happened and how did the design change to achieve this?

This is a tale of separating functions. But before I describe in more detail how Kings Cross works now, let me reflect a bit broader on what buildings do in social terms.

Bill Hillier and Julienne Hanson argue in their book ‘The Social Logic of Space‘ (chapter 4) that buildings have two main functions socially: firstly, a building distinguishes the inside from the outside and thus draws boundaries. It also controls access for different groups of users, i.e. inhabitants and visitors. Secondly, a building creates an interface between those different categories of users, hence it operates a mechanism for generating and constraining patterns of encounter and avoidance. In short: a building brings together or separates certain groups of people.

As such, separating functions should be a normal process for a building, and in fact, some buildings are centred around the idea of constraining and controlling encounter, and thus separating functions, for instance in a court, where defendants, barristers, judges, jury, witnesses, media and the general public are not supposed to meet, before their encounter is orchestrated under highly controlled conditions in the actual court room (see the wonderful article ‘The Architecture of Justice‘ by Hanson). However, most buildings do not require strict segregation by their programme and in a lot of cases, we have come to think of segregation as something bad. Ghettos come to mind, as well as unused spaces: dead, unloved and devoid of people. In architecture, functions are often integrated, combined and overlaid, specifically in spatial layouts of complex buildings: airports are not only transport hubs, but large shopping malls; circulation spaces in offices should not only serve movement, but allow for random encounter and spontaneous meetings as well as showcasing images or people’s work; shops are no longer just places for the acquisition of goods, but places for play, entertainment, leisure and socialising (as for instance the new Apple Flagship Store, see my thoughts on this in an earlier blog post).

So in some ways swimming against the current, the new Kings Cross station segregates people and separates its two main functions: arrivals and departures. This is quite a radical move and I can’t think of any other railway station doing anything like that.

The new western concourse with its wonderful roof is the new departures lounge. It really feels like a lounge, more than a typical railway station. There are shops, eateries, seating with and without attachment to cafes and a large departures board, which is visible from most of the concourse, also from a lot of the seats on the upper gallery space. There is lots of movement through the big hall, also since passing through the hall is the shortest way from Kings Cross to the neighbouring St Pancras Station, which people might need for changing trains, but the departures area didn’t feel crowded or too dense. It actually felt like a place I’d like to be in, not the least to indulge in one of my favourite pastimes: people watching. With high degrees of visibility across the hall and up and down the gallery, this seems like people-watching heaven.

Departures area in Kings Cross station: visibility, openness and comfort of a cuppa while watching the departures board

What used to be the old Kings Cross station is now entirely devoted to arrivals. I am not sure the shops and eateries were as busy as they were before the refurbishment, but the waiting and arrivals area itself felt generous and appropriate for its function: there was seating available, it was lively, but not packed, so you could see and be seen. You could now actually imagine meeting the person, you were supposed to pick from their train as opposed to searching the dense crowds that used to occupy the station before.

Arrivals area in Kings Cross Station: lively, but not crowded. You could actually pick someone up there without missing them!

Departures and arrivals areas are connected via a corridor and signs are clearly visible, so it seems that the separation of functions, i.e. providing distinct areas devoted to the act of departing and the act of arriving does not mean encounter has become impossible or too heavily controlled.

Nice images and a good set of architectural drawings for the more curious are available from archdaily.

In summary, I think this is a fascinating piece of design –  a building as it should be. It is not only impressive from an aesthetic point of view, but also carefully addresses what people are going to do in space and thus accommodates usage patterns. I so wish that Kings Cross was part of my daily commute and not Euston station, which could learn a lesson or two about engineering movement flows and catering for different overlaying programmes simultaneously by giving each one the space it needs.