Myths and common preconceptions about offices and workplaces abound. We are almost constantly bombarded with supposedly new ideas about management, workplace design, workplace trends and the general debate on the ‘future of the office’. Quite often it is merely terminology that is reinvented (‘Agile Working’), attempting to add a new sparkle to old (and possibly unloved) ideas (like ‘Hotdesking’). The brilliant workessence blog obviously has something to say about this, too, deconstructing the latest fads by imagining their opposites (‘Dumb Working’ anyone?).

In this series of blog posts I want to deconstruct some of the myths about offices and add a perspective from my research on the spatial and social realities of workplaces. This is partly inspired by my UCL colleagues and their series of blogs ‘10 Things You Might Not Know About the High Street‘. So here we go. Staring with my favourite myth: ‘the office is dead’.

When people claim that the office is dead, they generally refer to the fact that technology has allowed us to work from places other than the office. The German magazine for architecture and urbanism ARCH+ dedicated its issue 136 in April 1997 to the topic and announced ‘Your Office Is Where You Are‘. This call is repeated frequently using the phrase ‘work has left the building’ (almost 1.8 mio search results on google). The ability to work from anywhere – at home, in cafes, pubs, libraries, trains, airports, hotels and even on park benches – has obviously gained momentum with the almost ubiqitous use of laptops, smart phones and tablets and the ever increasing availability of Wifi.

However, the misconception begins with the assumption that simply because I can temporarily work from different places and people might increasingly do so, that this is automatically where my office is. My office is not my body. Neither is it my brain. An office is also not just the location where work takes place, because if that was the case, indeed, this location could liquefy and become networked into a multitude of interconnected places serving the new class of digital nomads. And an office is also not the tools needed to fulfill tasks and work activities, because in fact technology and the nature of many roles in the knowledge society would allow people to work from anywhere.

An office, I would argue, is a social place. It is a place for interactions with others; a place for collaboration and team work; a place to exchange ideas; a place to bump into others, strike a conversation and possibly to get to know someone new that might help solve a problem (research at the MIT by Thomas Allen has shown that the best ideas come from someone within the same organisation, but from a different team; this is essentially the same concept as Granovetter’s famous ‘strength of weak ties‘ argument). This importance of the office has been recognised by Yahoo’s CEO Marissa Mayer as she announced the end of homeworking for Yahoo employees around this time last year, arguing that “Being a Yahoo isn’t just about your day-to-day job, it is about the interactions and experiences that are only possible in our offices.”

So what exactly is it that the office adds to our working lives, or in other words, what are the affordances of space? Grounded in my research, I would argue that space is important since it affords 1) co-presence, 2) encounter and 3) routines. 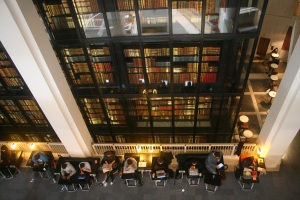 Nomadic working at the British Library allows for co-presence

In ‘Space is the Machine‘ Bill Hillier proposes that co-presence forms a social resource for people. He argues: “Co-present individuals may not know each other, or even acknowledge each other (…).  Co-present people are not a community, but they are part of the raw material for community, which may in due course become activated, and can be activated if it becomes necessary. However, even without conversion into interaction, patterns of co-presence are a psychological resource, precisely because co-presence is the primitive form of our awareness of others.” (Hillier 2007: 141) Of course co-presence is not bound to the office; it happens whenever there are other people. As such it is an affordance of space, yet may be realised in other places than the office and could also happen in digital space.

Secondly, space is important, because spatial configuration gives rise to patterns of encounter. For instance physical distances between the desks of co-workers are strong predictors of their interaction frequency (Sailer and Penn 2009) and this relationship between distance and interaction frequency  even holds if we control for other variables such as team affiliation or perceived usefulness of colleagues (Sailer and McCulloh 2012). Again, encounter may happen outside of the office, too and it could be argued that we increasingly interact with others through social media, email, chat programmes and telephones. Still the office provides an important location for these encounters to happen, as it brings together co-workers with shared interests and common goals. Serendipitous or unplanned encounters around the water-cooler, the coffee machine or near desks form an important part of knowledge-driven work processes (in one study quoted by Penn at al 1997 70% of interactions were unplanned) and as such they contribute to the innovation potential of organisations.

Last but not least, space provides a stage for routines and habits to be enacted. Time-space routines and everyday processes such as going for lunch together, regular joined tea breaks, as well as formal or informal group meetings contribute to an appropriation of space through continued usage. Eventually usage and appropriation over time will result in the formation of strong organisational cultures and identities. Everyday processes bring people together and allow for strong ties to form. In a study of a research institute it was shown that rationales for strong ties of mutual usefulness followed work processes (for instance co-authorship), yet they were enforced by spatialised routines (as I’ve argued in a recently published book chapter). This function of space, i.e. to form identities through continued face-to-face engagements with other people is what makes an office a valuable resource in organising work processes. Neither digital spaces nor the ever-changing and fleeting spatialities of mobile working will produce the same type of shared identity than the physical workspace.

In summary, the office is not dead. It is a much needed place for us to get our work done, meet colleagues, plot new ideas and socialise. It unites the three dimensions that space affords: co-presence, encounter and routines. It is undeniable that our working lives are changing and that technology plays a great part in transforming work processes. As we become ‘networked individuals‘, the office may no longer be the only place where work gets done, yet it will always play an important role.

5 thoughts on “Five Things You Might Not Know About Offices: 1. The Office Is Not Dead”